The words of cutlery 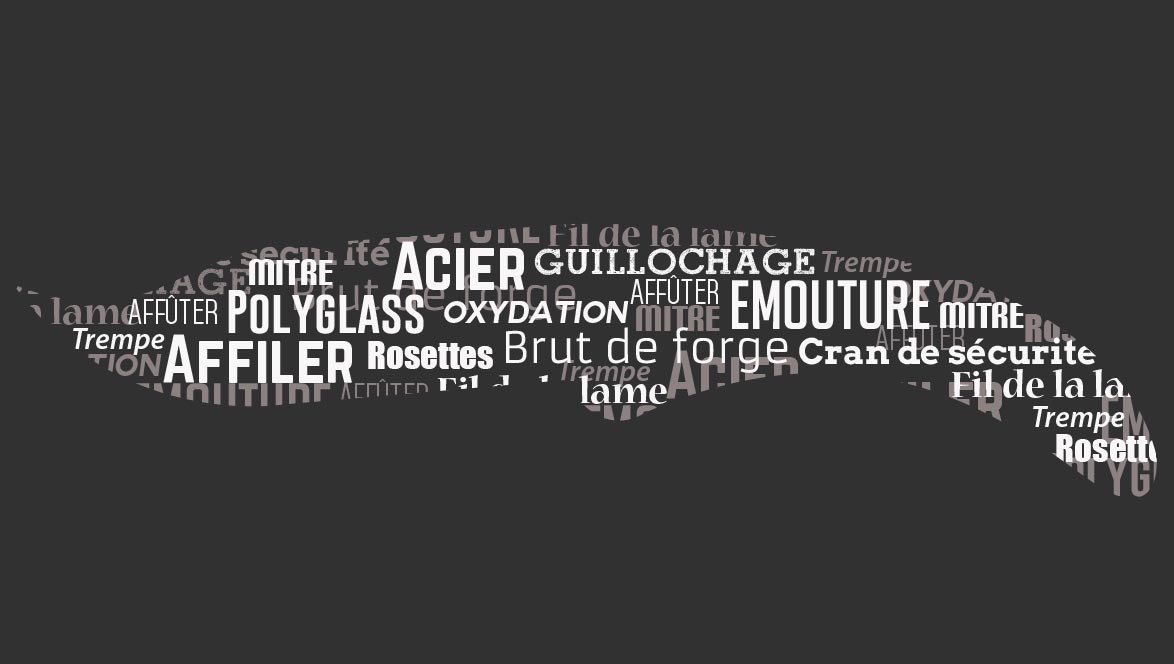 Glossary and definitions of the words of the knife

You will find here a small lexicon of the technical terms used to define the different parts of the knife, words commonly used in cutlery, to help you in reading our pages for the "uninitiated".

The lexicon of the knife is listed in alphabetical order.

Automatic: Mechanical system that automatically opens the blade of a folding knife by pressing a button, without intervening on the blade.

Bail: A fastener located generally at the end of the handle, it can be a solid ring connected to the spring or to the rear bolster or a hole in the handle that allows to pass a lace to hang its knife.

Blade wire: Sharp part of a knife or other sharp object.

Carbon Fiber: Extremely strong and lightweight composite material made of fine carbon-woven fibers. This material is used for the handles of certain knives.

Carbon steel: A chemical element associated with iron that composes the alloy known as steel. Its role is essential because it allows the toughening ability and increases the tensile and wear resistance. The higher the carbon content, the higher the strength of the steel can be increased by heat treatment, the blade is then more efficient and the sharpening is easier.

Chisel: Work of chiselling often carried out using file to work the metal and to decorate it by creating patterns. This operation is generally carried out on the non-cutting metal parts of the knife such as the back, the heel and the plates.

Damascus: High quality steel composed of a large number of layers, one hundred, which are folded, welded and forged together. This very old technique makes it possible to obtain a very good quality of cut and a longevity in use. The Damascus blades are recognizable by the damask motif, they are very appreciated by the connoisseurs of cutlery.

Edging: Part of the refined blade by sharpening it to form the cutting edge of the knife. There are different types of grinding such as flat grinding (V-shaped), concave grinding, convex grinding and scissors grinding.

False Edge: A part of the blade located opposite the cutting edge on the back of the blade. The false edge is not sharpened.

Fly: Metal part located on the head of the spring, it can be welded in series or forged and be integral with the spring. Often associated with the fly of the Laguiole knife represented by a bee, it can take identity forms like Corsica on the Vendetta Zuria.

Full-handle: The handle of the knife is completely made of the same material, it is mounted without bolster, neither front nor rear.

Guard: Part between the handle and the blade to protect the hand and prevent it from sliding on the blade.

Handle of the knife: Non-cutting part of the knife allowing the grip, it has different shapes according to the knives. The knife handle can be made of wood, horn, bone, ivory, resin, steel or composite.

Hardening: The operation consists in cooling the steel after heating it according to the precise process to obtain a very hard structure, called martensitic quenching.

Heat treatment: Successions of heating and cooling operations carried out on the blade to evolve its mechanical properties and make the blade more resistant. Hardening, tempering, annealing are part of the heat treatment of metal.

Inlay: Cutting line on the blade between the blade and the heel of the blade. It is formed naturally during the edging process.

Knife: Composed of a blade and a handle, it is a cooking utensil, a tool or a white weapon. It can be folded, fixed or multifunction. The blade, pointed and sharp, is made of metal or ceramic, it has a single edge or a double edge.

Liner-Lock: Steel plate or titanium added between the plates located under the handle that allows to unlock the blade to close the folding knife.

Lock-back: Knife blade lock system with a swivel bar between the turntables on the back of the handle. The rear end protrudes from the handle allowing the blade to be released and the knife closed.

Miter: The metal part at the beginning or at the end of the handle, the purpose of which is to reinforce the strength of the latter or to make it more aesthetic.

Oxidation: Chemical reaction due to exposure to moisture, it is a phenomenon of corrosion. Rust is the result of oxidation of iron.

Plates: Parts fixed on either side of the plates, forming the handle of the knife.

Platinums: Steel metallic Parts, brass or nickel silver to which plaques and miter of a folding knife are fixed.

Polyglass: The type of finish that gives a shiny appearance to the blade, bolster, spring or the entire knife.

Raw forge: Blackened blade emerging from the fire of the forge with marks on the surface occasioned by the hammer blows. Some knives retain this raw condition in order to obtain a rustic look.

Ricasso: The thickest part of the blade, between the handle and the entablure, is not always present.

Rockwel: Reference scale indicating the degree of hardness of a steel, abbreviation HRC.

Rosettes: Small metal washers associated with the rivets for the holding of the plates on the plates and for ornamentation.

Safety catch: Safety system to lock the blade in the open position to close it. Prevents the finger from closing unexpectedly. There are several security systems such as the lock back, the lock liner, the palm ...

Sharpening: Maintain the cutting edge of the knife blade for cutting.

Sharpening: Create the angle of the blade to end with the cutting edge, ie, create the edging.

Spring: A metallic part between the plates of the handle of the knife used to open and close the blade.

Steel: A metal alloy composed mainly of iron and carbon (between 0.02% and 2% by mass for carbon).

Stop: Textually it is a notch that stops a movement. A device which prevents the movable blade of a knife from folding over the handle after opening. This denomination is falsely attributed to automatic knives

Tab or nail stroke: Small notch in an arc of circle realized in the top part of the blade allowing to open the knife with its nail.

Two nails: The basic mounting system of a knife is a system called "2 nails" or "friction system". The heel is placed in abutment on the nail behind the pivot. It is the pivot friction that keeps the blade in the open or closed position.